I have been quiet on this blog for too long but it is not because I have nothing to say – quite the opposite, I could not decide what to say! So here is 3 months worth of it in the form of purple food!

Anthocyanins are compounds that give purple foods their colour and have been scientifically proven to have high antioxidative (radical scavenging) activity. They are found in cranberries, blueberries and aubergine, purple cabbage, pomegranate, purple sweet potatoes.

You would think that beetroot would also fall in this category but no, beetroot gets its deep purple colour from plant chemicals called betalains. Enough of the science, whether or not these food have all the nutritional values claimed, my Thermomix has helped me colour my table deliciously purple! I hope it inspires you to try different things too. 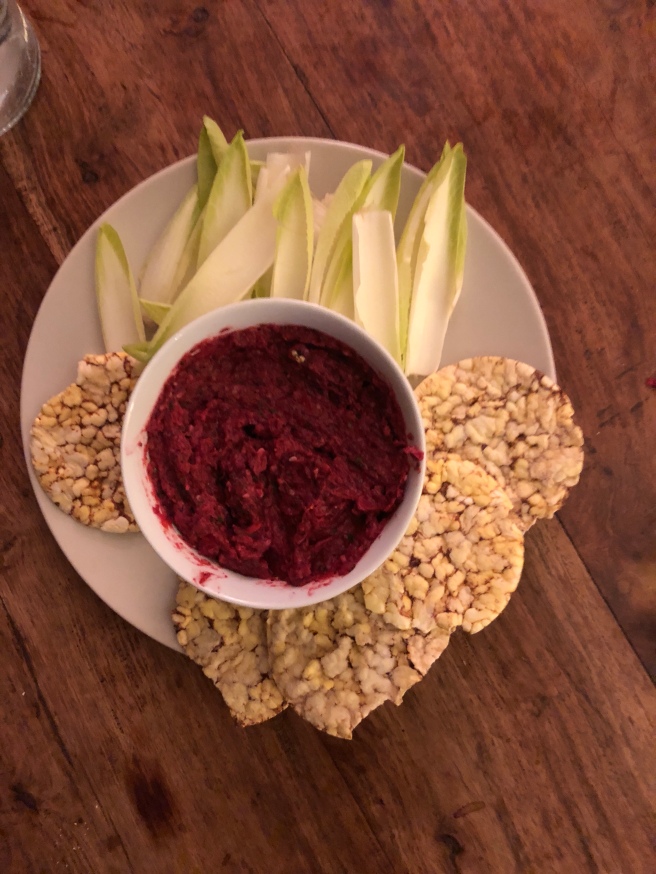 Make hummus in your Thermomix – I don’t even bother with tahini – I grind sesame seeds with lemon zest and garlic before adding the cooked chickpeas – at the end I chuck in the cranberries and coriander leaves and a green chilli goes quite well too. Look up Cookidoo for recipe inspiration!

Who’d have thought a kilo of red onions, half a litre of water, a teaspoon of salt cooked for 30 minutes at 100C and then blended for 1 minute at speed 10 with 30g of extra virgin olive oil could taste so exquisite? Well, I know it does and this soup is now a firm favourite at our table. I owe Leonie, a fellow Thermomix Advisor, for introducing me to this Polish recipe using brown onions.

It is so simple steaming purple sweet potato in the simmering basket of my Thermomix. Yes, you can do it so easily on the stove but I am so scatty, I often forget I have something cooking and end up with mush. Given how expensive this tuber is, because time and temperature are set precisely I never ruin it!

Just pour 500ml water into the TM bowl, add the peeled and sliced potato to the simmering basket and steam for 20mins/Varoma/speed 2.

I keep a bowlful in the fridge and serve it cold with a drizzle of my soy, mirin and sesame oil dressing and a sprinkling of toasted sesame seeds,spring onion and coriander leaves. It’s delicious with sliced red chillies pickled in soy sauce. Combine yellow, orange and white sweet potatoes for a colourful salad.

Steamed sweet potato whizzed up at speed 10 with cold milk and some maple syrup makes a great shake. Heat it up at 90C speed 1 for a yummy Korean sweet potato latte.

Serve cubed sweet potatoes with coconut milk and a drizzle of Gula Melaka (or date syrup if you can’t be bothered to make this coconut sugar syrup) for a lovely Nonya inspired dessert – have it hot or with crushed ice.

Heat 5g coconut oil in the TM bowl with a stick of cinnamon 1min/120C/speed stir. As soon as the cinnamon is fragrant drop 1 tsp of black mustard seed and cumin seeds through the hole in the lid. They should start to sputter. If they don’t, add more time. Add a sprinkle of asofoetida to the hot oil. Using tongs, remove the cinnamon stick. Add 500g peeled and quartered beetroot, a small shallot, a green chilli (deseeded for the faint hearted!) and salt to taste. Chop 5 secs/speed 4. If you want a finer dice then chop it at speed 5 instead. Cook 5 mins/100C/speed 2. Garnish with young coconut shreds (or desiccated) and coriander leaves and a dash of lemon juice. Stir through some yogurt and you have a delicious beetroot raita.

PLUM, PLUM & NOTHING BUT PLUM! 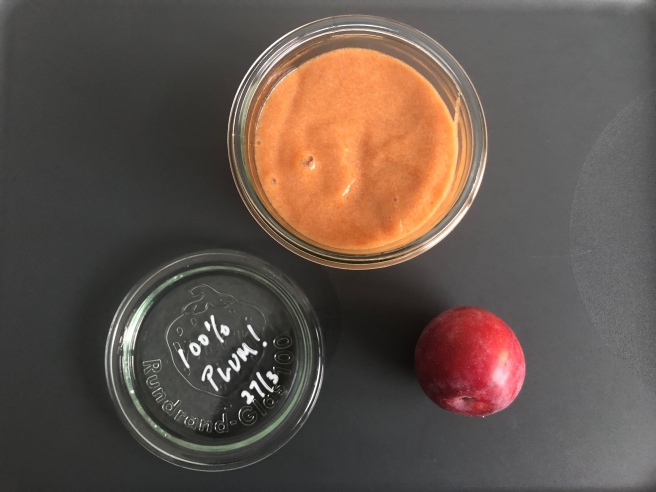 800g of the sweetest plums dumped whole in my Thermomix and cooked for 35 mins at 100C with the blade in reverse. Came back from school run to beautiful plum sauce which just needed the stones strained out. A drop of my favourite natural rose extract from Spice Drops to make a great dessert or cereal topping or purée for alcoholic or non alcoholic beverages. 1/2 tsp of home (Thermomix) roasted and ground 5 spice powder, a dash of sesame oil and Tamari soy for a delicious Asian plum sauce for duck. And save some for your baby if you have one!

Warning: I had the blade running at the slowest speed and made sure the bulky contents in the Thermomix bowl weren’t causing the appliance to bounce around and was far back from the edge before leaving it unattended. When I returned 20 mins later and was around to keep an eye on it, I cranked it to speed 3 on reverse (by which time the plums had softened anyway) so the machine didn’t jump around!

Incase you have not noticed:

I LOVE MY THERMOMIX!