One very wet February day, a mouse (3 cm max) scurried through the open back door and hid in the kitchen for three terror filled, sleep deprived (mine, not the mouse’s) days.

Having watched, loved but been more than slightly repulsed by the movie Ratatouille (however cute the cartoon character, the thought of a rat crawling around the kitchen turns my stomach!), paranoia set in whilst the rodent was in residence and every morsel of food was removed from every kitchen surface.

I was stuck for a place to hide four very ripe plantains.

What to do? I checked Cookidoo for banana recipes. I love this Thermomix recipe platform with its 20,000+ recipes which can be streamed to the Thermomix. It took me less than a minute to find (from the Sugar Free Collection), a banana bread recipe, save it and synchronise the Cook Key with the TM5 so the recipe appeared on my Thermomix with preset measures and method. It even let me add a note to remind me that I could adapt the recipe from banana to plantain and add peanuts instead of walnuts due to a family member’s allergy to the latter.

It took a total of 2 mins (inclusive of weighing in ingredients and 40 seconds of mixing) to make the batter and stick the loaf tin in the oven.

During the 40 minute baking time, I did a quick web search into the difference between the banana and plantain and I discovered that the latter has less sugar so that was a plus.

This info made me remember a news clip about Paignton Zoo banning commercially cultivated bananas from their monkeys’ diets as the fruit has been engineered to satisfy the ever increasing sugar saturated human palate and this makes the monkeys aggressive (would that explain some human behaviour too, I wonder?) and susceptible to diseases such as type 2 diabetes.

As I was pondering this (bread rising nicely in the oven), the song “Yes We have No Bananas” was playing in my head. So I googled it. I discovered some fascinating and somewhat worrying facts about banana cultivation. 95% of today’s banana are a monoculture variety called Cavendish. Monoculture is good for mass production but makes the herbacious plant (inaccurately referred to as a tree) rather vulnerable. It is under threat by Black Sigatoka.

Prior to that, the main monoculture variety Gros Michel was wiped out by Panama disease in the 1950s. Interestingly, the onset of the disease in 1922 gave rise to the aforementioned song!

The story goes that songwriters Frank Silver and Irving Cohn heard the phrase “Yes we have no bananas” from an immigrant Greek greengrocer in 1922. There was a shortage of bananas that year due to the onset of the disease and apparently the green grocer amusingly used the phrase rather than state the negative! So Silver and Cohn wrote the song with that title. It was introduced and sung by Eddie Cantor in the Broadway revue Make it Snappy and became a major hit in 1923. 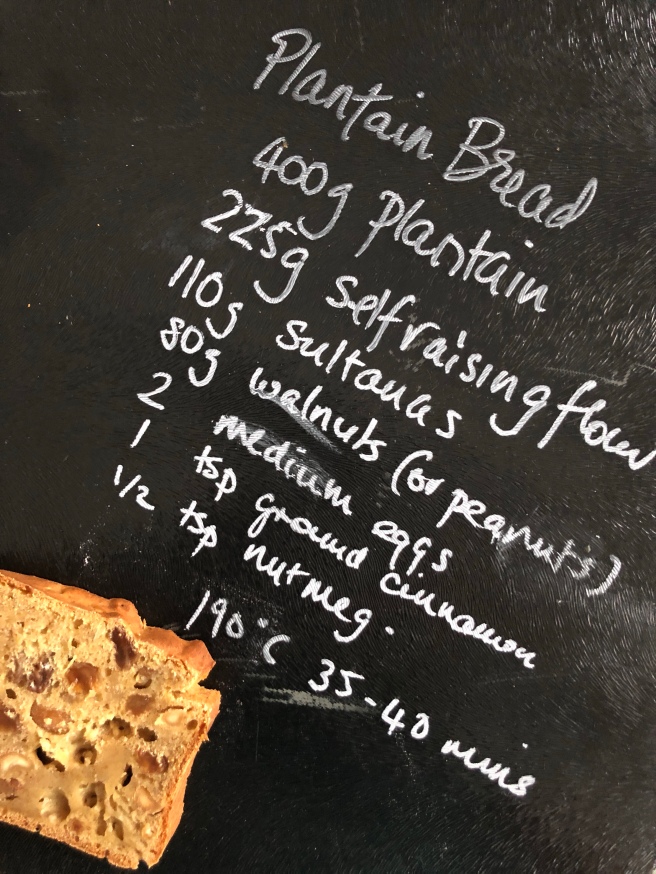 As the wonderful aroma of my delicious bread filled the kitchen and no doubt drove the wee mouse crazy as it hid under the fridge, I found this most delightful mouse/banana song cartoon from 1930 featuring the song (please watch it!):

Well, the end of my story is that the mouse was caught and humanely shooed out of my kitchen. I spent 5 hours disinfecting the whole room.  We ate and loved the plantain bread and I now make it all the time.  Thanks to my Thermomix …. and the mouse!