Meet Dolly and be prepared for my Thermomix tribute Dolly Delights: biscuits for dogs and an accidental delicious gluten free snack for humans too!

From the day I met this wonderful Westie 14 years  ago, we’ve had this bond.  One of my first photoshoots was of Dolly.  One of the first books I made was of Dolly.  When Blurb.com asked me if they could make a video of my book Curry Base as part of their Story Telling Series, the director asked what inspired me, it was Dolly who came to mind. That’s why she features at the start of the video story!

So when over the last bank holiday Dolly went missing, a dark cloud descended. 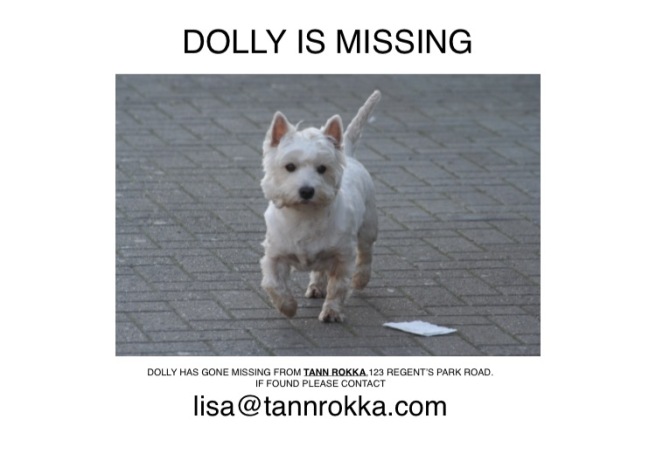 The good news was that she was found.  The bad news was that someone had taken her from Primrose Hill and 8 hours later she was in Sydenham, Kent! I was so outraged at this wicked act, I rang Anna Behrmann at the  Ham & High and told her they should warn others in the neighbourhood.

And the tie up between Dolly and the Thermomix?  Further inspiration from her!

The Primrose Hill Festival & Dog Show was around the corner and I was thinking of ideas to celebrate Dolly’s return.

Dolly loves carrots and apples.  So I set to work and discovered that actually, there are numerous things dogs should NOT eat.   I also discovered commercial dog treats are scarier than I imagined!

These are completely natural. I weighed brown rice and ground it in a minute into flour,  made one batch with peanut butter made from scratch with whole nuts in another minute, chopped whole carrots and apples in 5 seconds and kneaded it all with the remaining ingredients in another minute. All in one bowl. No fuss, no mess.

8/8 dogs it was initially tried on loved them. 9/10 humans liked them too and eat them as snacks!

I am sharing the plain version but by all means add 130g peanut butter instead of oil and a tablespoon of turmeric too. I find the buckwheat helps in creating a less sticky dough. You may have to adjust proportions as flours and fruit all have different moisture and absorption rates! I did not add water as the fruit and veg seemed to have enough. You may have to add some hot water if it is too dry or flour if the apples are too juicy.

4. Add buckwheat flour, oil and egg. Blend 1 min / speed 2. Knead 1 min / Dough Function till nicely blended. Adjust by adding extra buckwheat flour if the dough is too wet (it will be quite soft but does roll out surprising well!).

5. Tip the dough into a bowl and form into a ball and leave to rest for a few minutes.

6. Roll the dough out on a silicone mat to a 0.5 cm thickness, dusting it and the rolling pin with some buckwheat flour to prevent sticking. Using a small cookie cutter (I find a circle the most efficient shape), cut out the dough and place on baking trays. It is fine to keep them close to each other as the dough does not expand.

7. Bake for 20 – 30 minutes. The biscuits should be hard and golden brown. Again, subject to your oven and moisture of the dough you will have to adjust cooking times. Give it a couple of minutes at a time after 20 minutes till you get the optimum crunch. Place on a cooling rack. Note that they will harden more once cooled.

8. Store in an airtight container.